It is the total quantity of light emitted in all directions. It is measured by placing the light source at the center of an integrating sphere and is relevant for non-directional sources such as A type or when comparing two directional sources with different beam angles. 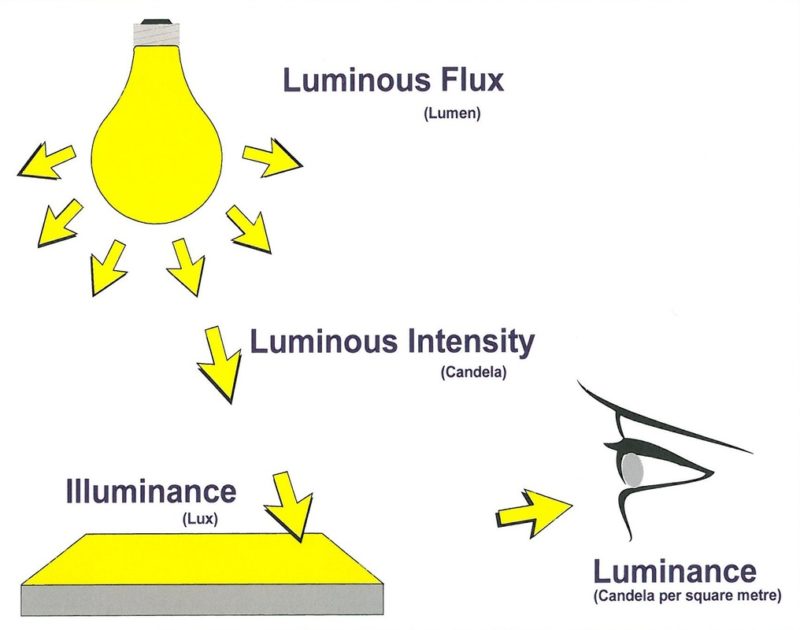 The brightest point in the beam, usually at the center. To measure light intensity, the light source is placed inside a goniophotometer and rotated 180° to measure the light distribution and determine the brightest point. It is relevant for directional lighting such as High Bay or Down Light types but must be used in correlation with the beam angle. It is also sometimes called MBCP (Maximum Beam Candela Power).

The angle of the light emitted by the source. It is the angle passed which the goniophotometer measured intensity is below 50% of the maximum (Full Width at Half Maximum). Different applications will require different beam angles usually classified as Spot (SP), Narrow Flood (NF), Flood (FL), and Wide Flood (WF). It is relevant for directional lighting such as High Bay and Sport Light type. The wider the beam angle, the lower the light intensity but the larger the lighted surface area. 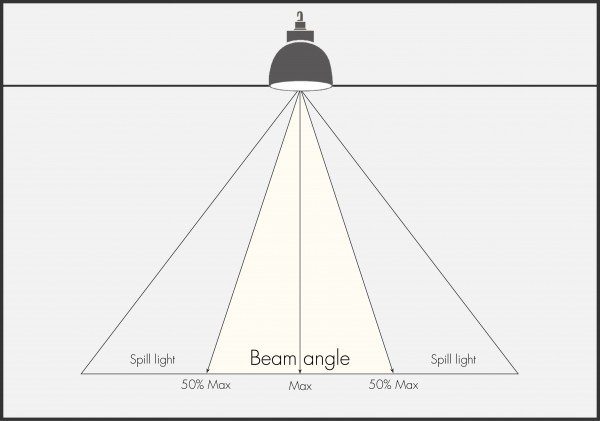 The color appearance of the light. This is measured in the integrating sphere, which analyzes the emitting wavelength to determine the color temperature. Incandescent and Halogen sources have a Warm White color temperature of 2700K while fluorescent and LED are available in all colors of light such as Warm White (2700K-3000K), Natural White (4000K), Day Light (5000K) and Cool White (6500K).

The measure of the luminous flux density falling on a surface. Footcandles or Lux levels are tested in the goniophotometer or with a lux meter. The results can be displayed on a graph showing the illuminance level at each distance of the light source as well as the lighted area. It is used to determine the type and number of sources necessary to reach a certain illuminance target in an application. The lux levels for every project are determined by many factors, most importantly the intended use of the environment. For instance, an office illuminance requirements will be higher than a hotel room. 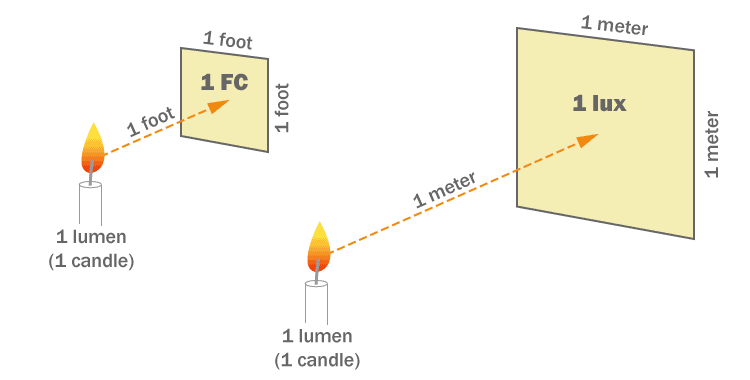 CRI measures the ability of a light source to accurately reproduce colors and is measured on a scale from 0 to 100. Natural light has a CRI of 100 and is what all light sources strive to replicate. A CRI of 65 is considered poor (right picture) while a CRI of 80 is considered good. Halogen and Incandescent sources have CRIs close to 100 while fluorescent sources are usually around 80. ENERGY STAR requires a CRI of 80 for integral LED lamps. 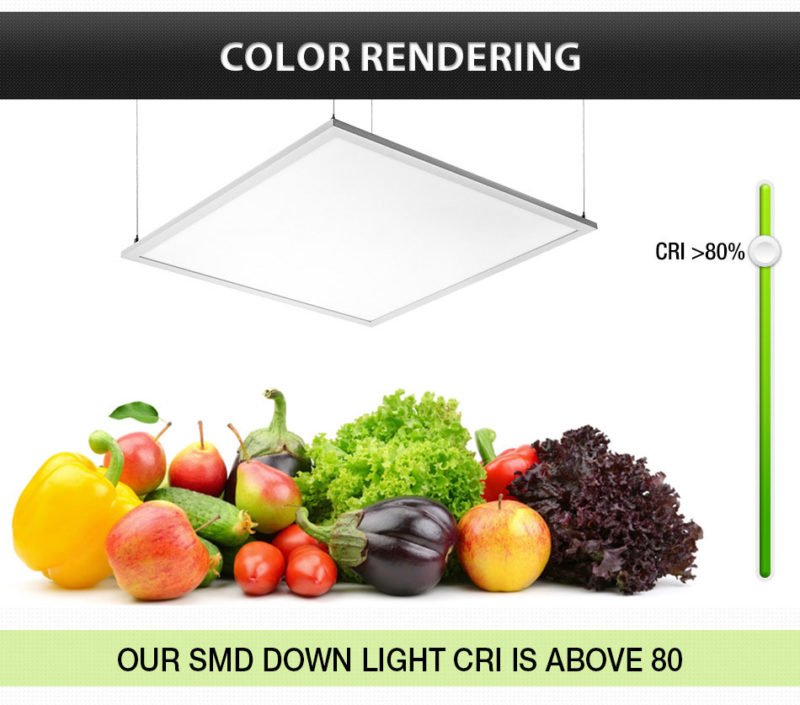 CRI for LED lamps is measured in an integrated sphere which analyzes the chromatic effect of the light source over a scale of 14 standard colors (R1-R14). After testing, each color receives a value. The actual CRI number is derived from taking an average of the values assigned to R1-R8.

Although the R9-R14 values are measured, they have no impact on a product’s CRI rating. R9 includes reds associated with things like food, clothing, and even skin tones. For commercial lighting, it is important to consider an LED’s CRI as well as the R9 value, especially in places like supermarkets, clothing stores, and other places where reds are prominent colors.

Traditional source lifetime is calculated according to the B50 standard. In this standard, the lifetime of the source is the number of operating hours after which 50% of the tested population fail.

Since LED is a semiconductor, it will not burn out like a Halogen or a CFL. Instead,  lighting output will decline over time. As a result, the L70 B50 standard was developed. Based on lumen depreciation of the LED, the L70 B50 standard considers the lifetime of a source to be the number of operating hours at which half of the tested population reaches 70% of the initial lumen output (30% lumen depreciation). Below this point, it is considered that the source does not fulfill its lighting requirements and should be replaced.

Due to the extended lifetime of LED and its fast development pace, real application data is not always available. This is why the industry relies on the extrapolation from the LED package lumen decline data. Because the higher the temperature of the LED, the faster the lumen decline, it is critical that the LEDs heat sink system is effective at dissipating heat. 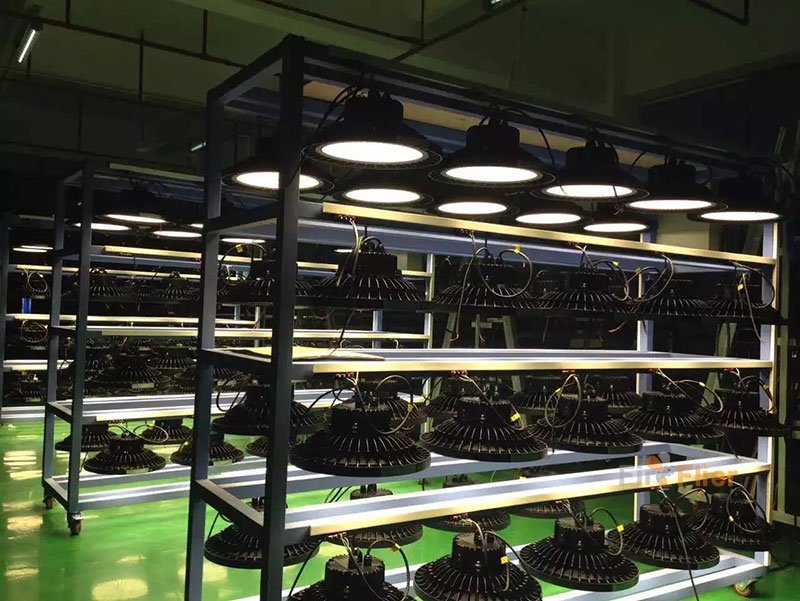 Measures the efficiency of a source by dividing the lumen output by the total power of the system including the driver. Higher efficiency is better for the user because a LED product with a high lumen per watt ratio will reduce energy needs while at the same time create a high lighting output. Incandescent or halogen source efficiency is around 10-15lm / W. Fireflier’s Ripple LED High Bay Light is 150lm/w and Crown LED High Bay Light can reach up to 180lm/w now.